Egads, I have a lot going on in the next two weeks! But I have two more posts related to the 1750 Court Gown, so I'll get them out lickity-split.

Here are the pannier and quilted petticoat that go under the gown. First, the pannier (these and more photos here): 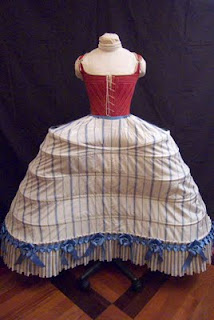 For a pattern I used the illustration in Jean Hunnisett's Period Costume for Stage & Screen: Patterns for Women's Dress 1500-1800. I did shorten it, since apparently I'm not as tall as the typical stage actress. 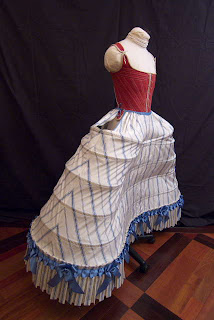 The fabric is silk taffeta, flat-lined it with a heavy weight silk organza. The hoops are modern hoopsteel; I would have like to use a natural, period material (such as basket cane) but that was proving to be too much of a pain, so I gave up.

The hoop channels, waistband, ties, and trims around the ruffle are all polyester ribbon, either grosgrain or double-faced satin, in the same shade of blue. I tried to find a silk ribbon that matched the blue stripe in the fabric, but this poly ribbon was the best match I could find. C'est la vie.

The bows along the ruffle are "butterfly pull bows." When I was a kid, I had some pull bows for gift wrapping. A little of 'net surfing (first to figure out what the heck these bows were called), and I reverse engineered how to make them. I made mine with just four loops; commercial gift wrap bows have eight to twelve. The bows come off, too. I just used the pull ties to tie them onto loops stitched onto the pannier.

I made the pannier to be tied on, but it's really difficult to tie it on tight enough on my dress form (it would be a little easier on the body, because I can sit down and thus alleviate the weight). So, on each side, I tied a loop in the back tie and tied a heavy hook onto the front tie. Problem solved! It' much easier to put on that way.


Hunnisett suggests putting a pad in the back, so I gave it a shot. The effect is to tilt the pannier back, and I liked it, because it made the front of the pannier flatter.


Over the pannier goes a quilted petticoat (more photos here): 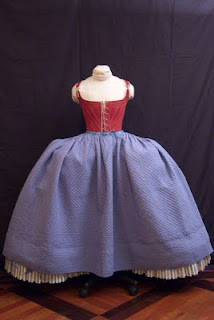 It's made from a single king-sized quilt, and yes, it's a little short but it does it's job (hiding the ridges made by the pannier's hoops) so I can't be bothered. 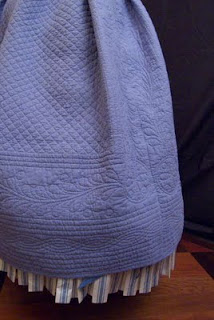 Period quilted petticoats don't have batting from hem to waist; the batting normally ends a few inches below the waist. I find this quite logical, because it makes the waist less chunky, and easier to pleat into the waistband. So, I pulled the quilting stitches out of the top of each panel, removed the batting, then re-quilted the area. Yeah, seriously tedious. But I'm very pleased with the result. I also removed the batting from the seam allowance at the side seam, before doing a modified fell seam. 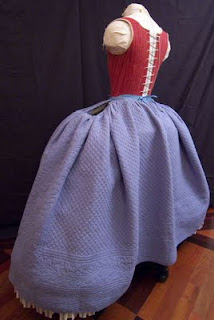 The quilted petticoat is easily the heaviest part of the whole garment, heavier than the pannier. But it does give the gown an excellent shape and look, and, really, well fitted stays help to carry the weight.
Posted by Claudine de Montigny at 11:13 PM