In this post I'll take the gown off the dress form and show how it's put together. As before, you can find high res photos, and many more of them, at my website.

I used J.P. Ryan's pattern, and modified most of it. This wasn't because of any problem with the pattern, in fact, far from it. Patterns are drafted to fit someone, and because of my physical attributes, that someone isn't me. Moreover, I needed to change the back to work with the pattern in the fabric (I simply had to have symmetry) and the pattern was meant to go over J.P.'s pocket hoops, not a big pannier. I do love J.P.'s patterns: they're well researched and meticulously drafted, and I've used them to make now five garments with super-happy-happy results.

First, the stomacher comes off. 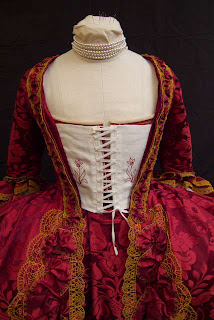 Underneath the stomacher is an under stomacher, which is what keeps the bodice on the body. This is part of J.P.'s pattern and I think it's great, because it makes the bodice very stable. Here also you can see pattern cheat #1: instead of stitching eyelets to lace it shut, I used securely attached strips of cotton tape. I learned this method from Jennifer at Festive Attyre years ago (and, indeed, used it on my facsimile of her Italian working class dress; you'll find her explanation on this page). And because I can't leave well enough alone, I decorated the blank space on the under stomacher with a fancy machine stitch (technically, not embroidery since it doesn't require my machine's embroidery arm). 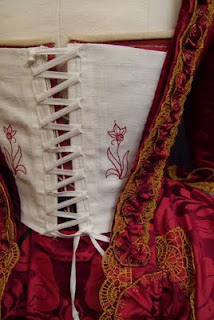 And to make my life easier, I attached a tapestry needled to the lacing tape. 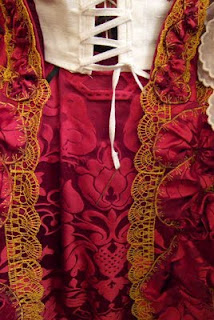 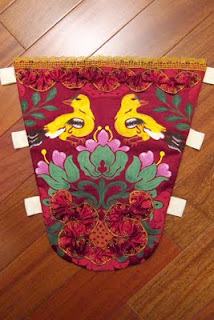 I wanted to try something different, so I cut out a section of the fabric featuring the birds, since I wanted to emphasize the "love birds" theme in the fabric. I painted just enough to fill the stomacher, using Neopaque silk paints from Dharma Trading. It was mostly like doing "paint by numbers", followed by some shading to give everything some dimension. I had some coverage problems with the yellow and orange, but all the other paints went on smashingly. I don't know the last time that I actually painted something (except for doll faces, which are quite different) so wasn't sure how this was going to come out, but in the end I can't complain (well, maybe a little, but I'll keep it to myself). The coloring of the birds are based on the yellow finch.

Painted silk is historically accurate (Hallie at Sign of the Golden Scissors has been talking about it, for instance, here). Whether there ever existed a painted stomacher, and the whole gown was not also made from painted silk, I don't know, and haven't made any effort to find out.

I wasn't sure how much fabric I would need to get over the pannier, petticoat, and petticoat, but it turned out pretty simple. The gown is two widths of the 60" wide fabric for the back, and one width, split in half, for the front. Front and back join along the side skirt with straight cuts (the pattern has one straight, and one diagonal cut, I assume so that the front pulls open in the expected V shape). The fabric that extends out from the waist then got stacked into fat pleats and tacked to the bodice lining, which you can (sort of) see here: 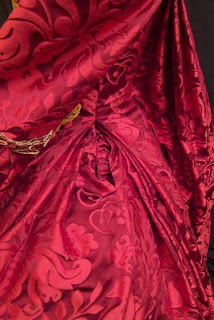 Here's the interior of the bodice, where you can maybe see the tacking stitches for those pleats, and two lines of stitches that keep the side back of the bodice attached to the lining: 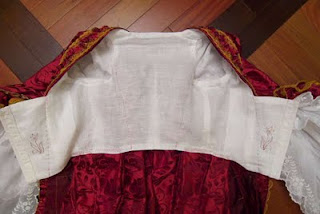 Here you can also see pattern cheat #2: the pattern calls for a set of ties along center back, so that you can expand or contract the bodice. I wanted to 1) not deal with ties and boning; 2) save time; and 3) my torso dimensions don't fluctuate much, which makes this a "nice to have." So, I just put in a big fat dart, and if I do really need to adjust I can let the dart out.

Around the hem and open front of the skirt I put a deep facing, using silk taffeta: 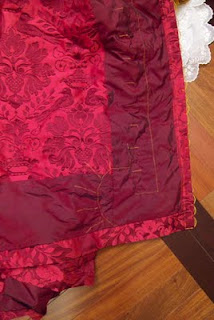 Here you can also see the gold thread that keeps the lace attached. I like facings, because they provide body in key places. The damask here has a lot of body, but the addition of a facing forces it to behave. Along the hem, the facing also helps defend the fancy fabric from dirt and snags.

The gown comes off, and here's the petticoat: 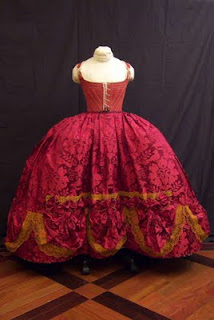 To make the petticoat I ditched the pattern completely. I took three widths of the fabric (which was somewhat more than enough to go over the under structure), seamed them into a tube, and then pin-fit it to the dress form, pulling up the sides to make the hem level. I tried to make the front very flat, but was having trouble getting the fabric to behave, so ended up with a wide box pleat at center front. The flounces along the hem go pretty far around because I anticipate wearing the gown "retroussée dans les poches" (meaning with the skirt pulled through the pocket slits) so that I can get the train mostly off the ground.

The sides I pleated to a strip of grosgrain, leaving an opening so that I can get to my pockets. 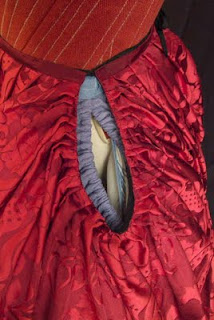 This method is more-or-less suggested by Jean Hunnisett in Period Costume for Stage and Screen: 1500-1800.

Here's something that I tried with this petticoat that I can't document, but that did help control the front and back halves while putting this on: 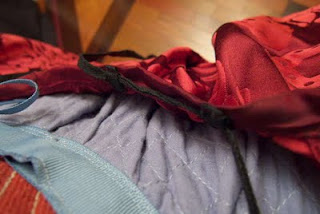 I put a couple of loops on the inside of the front waistband that I thread the ties through. On the back, the loops should have been on the outside, but I muffed up and put them on the inside. They're still usable, but a bit more of a hassle.

Lastly, this is what happens when ya' plum run out of time: 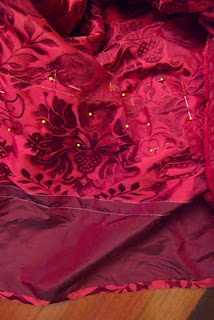 The petticoat's hem facing is just based on, and the ruching is held on with pins. Yeah, big mess.

Geeze, this ended up being a really long post. Sorry about that! Hopefully you didn't get bored halfway through. :)
Posted by Claudine de Montigny at 11:01 AM