The last layer underneath my 1750 Court Gown is a set of stays (more photos here): 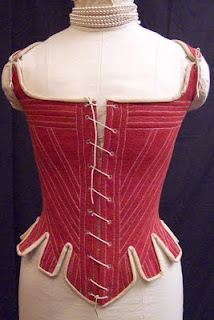 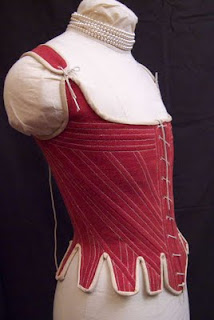 Front laced stays are not common, but not unheard of. My old stays lace in back only, and are fully boned, so this was an attempt to do something completely different. Front lacing really does make putting this on super easy.

I started with the Butterick pattern, 4254, because the shape of the pieces are, essentially, documentable. I suspect this pattern is based on an illustration in Norah Waugh's Corsets & Crinolines but I don't have the book handy, and can't check.

Aside from the the approximate correct shape of the pattern pieces, the pattern was BAD. It had the typical "Big 3" problem, in that for my measurements it expects to be worn with back edges touching. The bigger problem, though, was that it's extremely short. My body runs a tiny bit short from bust to waist to hip, and it was waaay to short for me. I started with one size smaller than the pattern recommended, added length, removed tabs, moved the shoulder tabs...it's not really the same pattern anymore. I went through three mockups (and one expert fitting consultation) before I was satisfied. 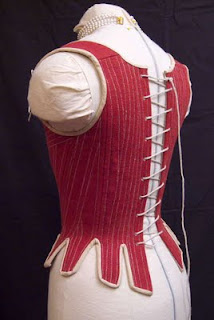 It's made of two layers of linen canvas, heavily starched, and one layer of what I think is an upholstery linen (it's quite thick ).To get the look of hand-stitched channels, I used a heavy linen thread on the exterior (35/2 from Burnley and Trowbridge), lighter cotton thread for the bobbin. I used the same heavy linen thread for the eyelets.The boning is "artificial whalebone" (aka German Plastic). 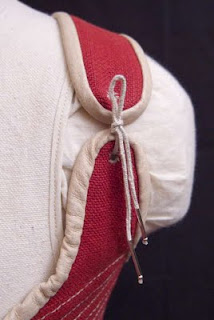 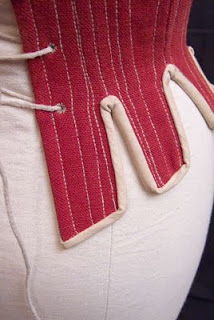 The binding is natural pigskin.

Since I'm teaching a class on lucet weaving at Costume College this year, I felt I had to put rubber to the road, so the speak. So, the straps and front of the stays are laced with standard lucet cord, made from cotton crochet cord, and the back is laced with double lucet cord. I think the cord is certainly sturdy enough for this application...I just need to get all the stretch out. 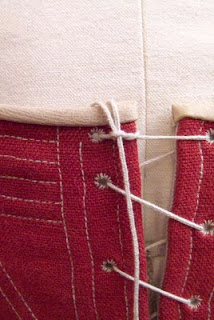 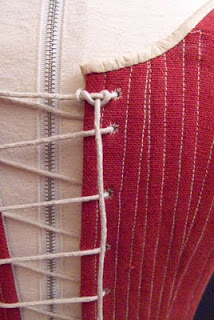 I feel like I've been making these stays for 10 years...that's when I bought the tomato red linen that makes up the exterior. They have, of course, evolved in those years (for instance, I had originally planned to hand stitch the whole thing, and Butterick 4254 didn't even exist back then) and despite making the first mock-up two years ago, it took me until March of this year to actually CUT the red linen. Costumer's sewing block? Nah, I've just had so many other things to do, and have a great set of stays already...but the old stays has issues...hence, new stays!
Posted by Claudine de Montigny at 7:56 PM