I've started making bobbin lace! Here's my first weaving, a shape usually called a bookmark, from a pattern I found on Alexandra Stillwell's blog. This one is bookmark 3.
This lace is made from a fairly heavy crochet cotton whose weight I don't exactly know since I no longer have the label (I'll make the effort to figure it out eventually). It was good for learning the stitches and pattern, and made it easy to see what I was doing when…undoing.
I have a bobbin lace kit, which I got as a gift (mrfmfl) years ago. It came with a big round "cookie" style pillow.
My aim is to make lace yardage, so I made a bolster style pillow. The core of the pillow is a pad of shredded denim and other materials, which comes as insulation in our meal prep kits. Rolled it around a dowel, and wrapped the roll with a couple of layers of wool flannel.
The cover, in traditional blue, is cotton twill. Excluding washing the cover fabric, from cutting the dowel to stitching down the ends of the cover, the whole thing took me maybe an hour and a half to make.

I used a square dowel on the theory that if the pillow is resting on the dowel, the square shape will keep it from rolling too much. But I'm using my little Ashford rigid heddle loom (darn handy thing it's turned out to be) as a stand, and the pillow wedges nicely between the front beam, the horizontal support, and an empty heddle. I'm leaving the dowel, though, because it serves well as a handle for rotating the pillow.

In action, I've found the pillow to maybe be not quite firm enough. Pins flexed a little as I pulled stitches around them. I may wrap a few more layers of wool flannel around the core, and see if that makes it a bit more firm.
Posted by Claudine de Montigny at 11:19 AM 1 comment:

Clever and talented butterball_bunny has been posting pics on Instagram of fly fringe she's making, so now I have fly fringe on the brain.

I started some fly fringe AGES ago...maybe three years ago?


I thought I had silk floss, but if I do I have no idea where it's go to. The flies pictures above are made from Japanese cotton. It takes a lot of work to make the flies super fluffy, so this is not really a great material for fly fringe.


I'm also trying to figure out how to use a tatting shuttle to put the knots where I want them. I don't recall where or when I got this bone shuttle -- probably Costume College some years ago -- and I've never tatted a darn thing.

The plan is to eventually weave these bow tie flies into a tape. Naturally, I've picked a style of fly that will requires dozens upon DOZENS for even a yard of fringe. Stay tuned.

What's up with this blog: oy, it's been a very, very long time since I've added anything to this blog. Truth is, I'm just not a very good blogger. The other truth is that my creative endeavors have become even more sporadic and random than ever. I post (sporadically) on Instagram, so hop on over there if you're curious about what I've been up to.
Posted by Unknown at 2:49 PM 4 comments: 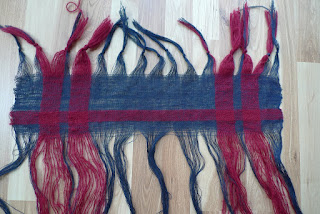 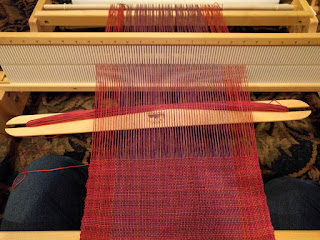 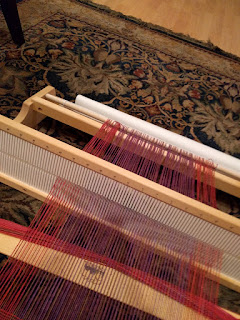 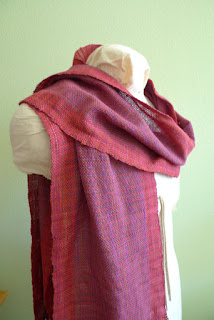 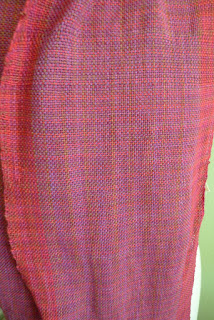 I think that I'm a typical costumer, in that, over time, I've accumulated a lot of costuming "stuff." I managed to clear out a few things at the GBACG Costumers Bazaar last weekend, but still have many extra bits that need to go. So, I've set up shop at Bonanza, and listed many costuming accessories, including some of the things you see below. A link to my Bonanza shop also appears in the pane on your right.

Here's a preview of some of the things I've listed. Funnily enough, they're pretty much all left from workshops I've taken or taught.


What is Bonanza:
Bonanza advertises itself as an alternative to eBay. I find that it's a bit more of a cross between eBay and Etsy. It's a marketplace for folks like you and me to buy and sell stuff. Like Etsy, sellers set up a shop.

Why am I using Bonanza:
Frankly, Bonanza has a much simpler and affordable fee structure than eBay or Bonanza. I'm not a very active seller, and it can take me a long time to sell things. So I chose to use Bonanza because listing and maintaining listings for a long time is easy and affordable.
Posted by Claudine de Montigny at 5:49 PM No comments:

I didn't make any new costumes for Costume College this year, and I didn't want to go without costumes, so I brought the three most recent things I've made or acquired.

At the Friday Night Social, I wore a 1950s-inspired cocktail dress. I made this for a special occasion in March, and will do a separate post on it later.

For part of Saturday I wore the 1920s ensemble Lynn McMasters made for her new turban pattern. I'm really lucky that Lynn likes to use me as one of her models. I'm not super fond of having my photo taken, but frankly I'll do anything Lynn asks.


And finally, for the red carpet walk prior to the Gala, I wore the gown I made for the Bustle Tea last year. It has some updates, and deserves a full blog post (which I'll get to sometime soon).


Other highlights from Costume College include: seeing the ladies from The Tudor Tailor again, for the first time since I attended a workshop with them back in 2007; the always fabulous Cathy Hay; seeing some of the Web's most beautiful and talented costumers in person; lectures with fantastic folks like Jennifer at Historical Sewing, Ithylwyn, Amanda Irwin, Rory Cunningham, Heath Hammond, who I think said he was affiliated with the English Warbow Society, and many others; the goodies I had not meant to buy but that came home with me anyway; and, of course, catching up with everyone in my costuming "family," I love you guys, your talent, and your endless creativity.

I'm back for another quick, catch-up post. Back in April I spent a day hanging out with Lynn McMasters to model for her. She was (or still is) working on a pattern for turbans for various time periods. She has lots of friends who model for her millinery, including, on occasion, me.

If you follow Lynn on Facebook at her page, "Out of a Portrait" you've seen this photos before, as well as pics of her other fabulous models and hats. If you're a member of Facebook and don't follow Lynn, scoot on over there and follow here to get the scoop on her up-and-coming hat patterns.

This one is based on a late 18th century headdress. I can't recall the name or artist of the portrait that Lynn used as a model. The outfit was provided by me. 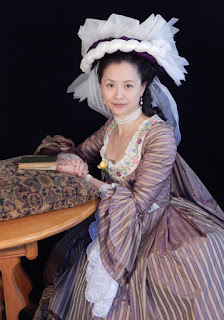 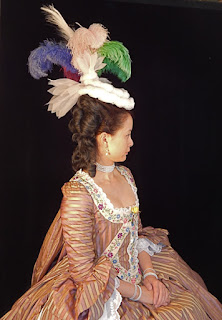 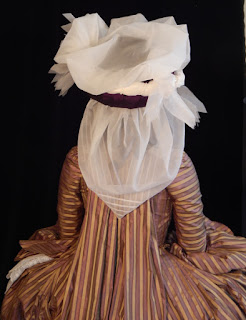 Jumping forward over a century, I don't recall what time period Lynn attaches to this turban, but given the hairstyle she probably means 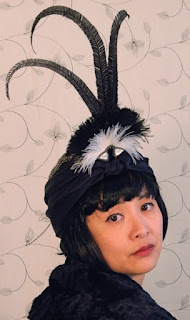 Still in the Jazz Age. This one features a fun sash and crazy feathers. Lynn made the dress. 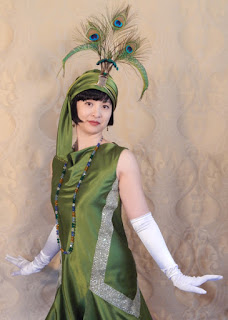 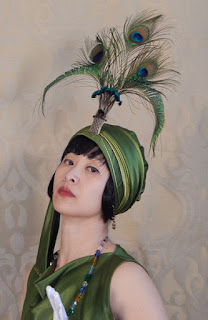 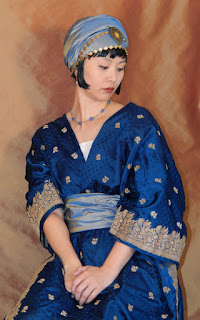 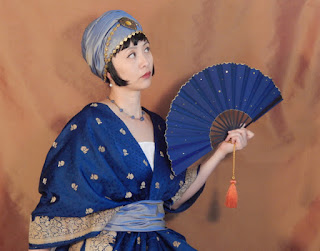 Lastly: this is not a turban, but Lynn needed photos of this really cool, lace-brim hat. 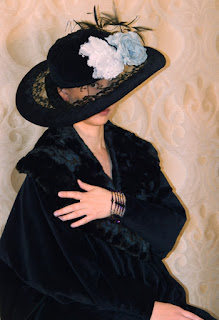 Hello! I'm here! Yes, I'm still alive. Just popping in for a quick post (hopefully the first of many).

Last weekend I went to Maker Faire for the first time, to model a dress made by my good friends at Amped Atelier (that's a link to their Twitter feed), Sahrye and Hal. This was for the MakeFashion fashion show. MakeFashion is one of the groups that regularly participate in things like Maker Faire.

Frankly, I was a little terrified. I'd never walked on a runway before. But the MakeFashion folks were very cool, organized, and prepared, the models and designers were fun, and in the end I just relaxed and had a good time. And besides, anything for a friend.

Photos and video should eventually be uploaded at the MakeFashion website. As of today, I believe you can see a video that includes the dress, worn by the lady who modeled it in Calgary.

Sahrye also blogs over at It Came from the Stash.

The dress came in two pieces, the turquoise and black sheath dress underneath and the hoopskirt that went over. Multi-color LEDs lit up the deep vee neckline, and also went down the back. The hem of the hoopskirt featured a scrolling marquee.

Amazingly, the dress fit just about right, even with my odd dimensions.

I also want to point out the two ladies in the background of the photo above. The one in yellow had two prosthetic lower legs, and the one on the right had one. The prosthetic were  beautifully carved, and lit up from the inside. Not only was that just NEAT, these two women just worked the crowed like you wouldn't believe. They were AWESOME.

My makeup and hair were by Sahrye and our good buddy Mia. It featured a LOT of glue-on rhinestones, and glitter, yes glitter, painted on my lips. Looked great under the runway lights.

The dress was quite a hit. After the second show, two different people came up to me and asked where they could get one.

Wish I had more pics, but unfortunately I wasn't behind the camera this time. Hopefully soon we'll see some official pics from the MakeFashion folks.
Posted by Claudine de Montigny at 6:08 PM No comments: