These things are really rather old, but they're new now because I just uploaded galleries to my sad little website (it needs a lot of work...I'll get to it, eventually!) 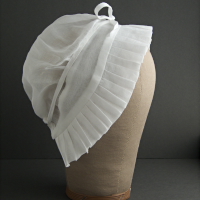 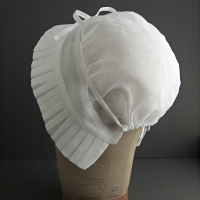 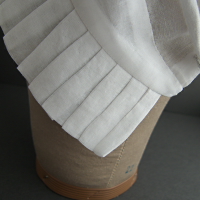 I love caps. They're one of those things that really make a costume complete. I made one cap before this, but gave it to a friend without taking pics.

The pattern is from La Fleur De Lyse. The drafter, Suzanne Gousse, dates her caps to the mid-eighteenth century, so I've arbitrarily slapped the date 1760 on this cap. It's made of cotton organdy, which can hold those pleats without pressing! Amazing stuff. The tape is linen.

I forgot to take a pic of the cheat I use to keep it on my head. Soon as I remember, I'll add that.

Yes, they are made from bed ticking. The interior is muslin, the boning is "artificial whalebone" (a.k.a. German plastic), the binding is poly grosgrain and the grommets (gasp! yeah, I was in a hurry) are nickel.

Here are the slightly edited notes I wrote up on my website:

These were my very first set of stays. At the time, I just really needed something, and fast, so that I would have a foundation to make gowns over. Hence, I made no effort to use period-accurate materials, and used whatever I could get from the local fabric store (except the grommets and plastic whalebone, which I already had).

For the pattern I used the Custom Corset Pattern Generator as the base, and modified the result using an illustration from Cut of Women's Clothes by Norah Waugh. Waugh apparently based this illustration on one in Maurice Leloir's Histoire du Costume. Interestingly, Leloir dates these stays to 1715, while Waugh dates them to the mid-eighteenth century. Since Leloir came before Waugh, I'm un-scientifically going with his date.

In constructing these stays, I used what I read to be a historically accurate method: make up each of the ten panels individually (sew channels; insert boning), attach the panels to each other, then bind the edges. The stays should probably have a lining, but I didn't bother.

I never used these stays. They have two problems: first, the center front point bends up, though that can easily be fixed by adding a busk pocket and busk to the inside. The second problem is harder to fix, which is that the straps are set too close to center front. While this doesn't affect the fit, the wide, deep necklines that are common with 18th century clothes mean the straps would show.

But probably what really happened with these stays is that I made the set that I actually use, and moved on without them.
Posted by Claudine de Montigny at 1:40 PM