Inside the Parasol, Part 1

The parasol canopy that's featured in my earlier workshop posts on parasol restoration (Part 1 and Part 2) wasn't turning out as good as I wanted, so I took it off. This gives me a chance to talk about some of the innards of the parasol canopy. Fair warning: this is going to be a rather pedantic post, but I find these details just SO interesting, and if you're an aficionado of parasols, then hopefully you will, too.

Today I'll be discussing two common features you'll find underneath a parasol canopy. For lack of being able to find consistent terminology, I call these the "donut" and "joint wraps." More on terminology in a moment. I say they are "common" specifically because they are not universal, or at least there is no way for me to prove that they are universal. In the dozens and dozens of parasols I've seen either in person or online, however, I see them more often than not, and thus feel safe to conclude that they are common.

Ok! So first: the "donut" (I'm going to keep putting it in quotes to underscore that this is terminology I made up). This is a circle of fabric or leather that sits between the ribs and the canopy.

When made of fabric, it's often (but not always) the same fabric as the canopy.

My guess is that the primary purpose for the "donut" is to protect the canopy from the metal, moving parts of the frame. I've also found that it's sometimes used as an anchor to stitch the canopy to, around the base of the parasol tip.

Another purpose I've found served by the "donut" is to hide the spring mechanism of pagoda parasols. I've seen one "donut" that had this function that was enormous. This was on a friend's parasol, and unfortunately I don't have a photo.


The Fox Umbrella Company ("Keeping you dry since 1968") calls this thing an "inside cap". I've also seen it called a rosette, but I like to think of rosettes as gathered, scrunchy rings of fabric, and the "donut" is invariably a flat, circle.

Here is the "donut" I put on the workshop frame:

It's the same powder-blue silk taffeta as the canopy. It's a little big for the scale of the frame, but I can't be bothered to do anything about it. Now, fraying is completely historically accurate. But I hate fraying, so this little ring was completely soaked in fray check. Don't hate.

Next: "joint wraps." These are bits of fabric, also commonly the same as the canopy, that are wrapped around the point where the spanner ribs meet the canopy ribs.

The Fox Umbrella Company calls these "prevents," and, indeed, their purpose appears to be to prevent the canopy from rubbing the metal at the joint. On older frames, where this joint could have some sharp edges, this was probably quite necessary. Newer frames, however, (say, 1875 and later) have pretty clean joints, and I would think the "joint wrap" isn't as necessary. But tradition is hard to overcome, and I have an 1910-ish frame that was refurbished sometime after the invention of nylon and the commercialization of plastic that has vinyl "joint wraps."

Loosely and broadly speaking, the folded type of "joint wraps" that I have found are made from silk, because, well, an oval of silk would fray away. Both styles, though, are attached the same way: doubled thread wrapped a few times above the joint and a few times below.

Here are the "joint wraps" on the workshop parasol:

I've attached them with doubled Gütermann silk thread in a matching color (from ye old big box store), with a simple knot at the first stitch and last. 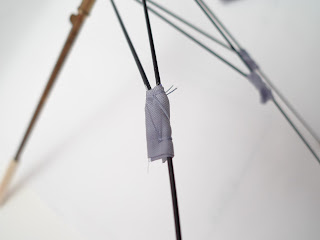 And that's the end of today's lecture.

I've ambitiously labeled this post "Part 1" because I figure I'll be talking more about the innards of parasols in the future. I just find them so ridiculously interesting, but I'll try to focus my posts on restoration issues. Anyway, I'm done for tonight, but I'll leave you with a teaser of where the workshop parasol is going: 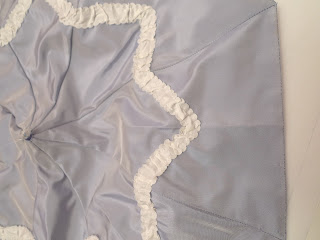