Give a woman power tools, and creative things will happen (whether they were meant to be that way or not).

Some years ago I bought this little parasol:

It was cheap. Even in its day it was must have been cheap, its construction is mediocre, its parts are economy. And your eyes do not deceive you, its handle is broken off and irretrievably lost. But that made it unloved, and cheap.

This isn't the only parasol I have that has lost its handle, but because it's such a budget frame it's going to be my first full-handle-replacement project. Over the last few weeks I've been gathering the tools and parts I need. Today I went at it (though I'm REALLY supposed to be doing Costume College prep. Oh well.)

First thing is the replacement handle. I had originally planned to use an ordinary dowel, but went with the top end of a walking cane instead. A dowel would have had uniform thickness from top to bottom, while canes are generally a bit tapered, and that made, I think, for a more natural shape. The cane I used was *ahem* cheap, not very round, and not even meant to be used as a cane (it's only decorative). But it was a tapered stick of wood, which would do the job.

And now I had to solve a problem: how to drill a straight, centered hole into the end of a dowel? I explored a narrow handful of options (including buying a drill press, but I don't have anywhere to put a 100+ lbs tool), and then Lynn McMasters said, go buy this:

This is a doweling jig, which one uses to drill holes into the ends of planks in order to join them with dowel pins. Lynn has one that she's used to build a table, or something (Lynn is a master at technical solutions).

The doweling jig solved half the problem. I still need a way to hold the dowel itself, because if I just clamped it into the jig, the dowel would likely just rotate with the drill bit (or so I read on woodworking websites). So, I needed a dowel jig...for the doweling jig. Yeah, stay with me here.

I found the solution here: http://www.woodworkingonline.com/2008/04/08/dowel-drilling-jig/  I just needed to adapt it for the doweling jig.

First, to drill a big hole. So happens I have these big drilling bits (don't ask why, I do a lot of DYI on my house).

And here's what happened.
I wanted to fix a second piece of wood at a right angle to the one with the dowel hole, so I drilled holes for two dowel pins into the piece on the right (and used the doweling jig for this, yep, it works every bit as well as advertised!) Then I went to drill two holes into the piece on the left, and, well, I tried to drill into the kerf and split the wood.

I went at it with a file to see if I could make it work anyway. I got the other dowel pin to fit, but notice here that the upright piece is at an angle.


Yeah, that's not helpful when you're trying to line things up perfectly. These are postmortem photos, and I only noticed the off-kilter angle when I took them. I'll have to fix that before I try this again.

Now to put it all together. I clamped the work piece, the new handle, into the hole, and clamped the whole thing into the doweling jig. Yes, that made quite a contraption.

And here's what it looks like. Bit off center, but it'll do.
Notice that the frame, with the tube attached, is bent. I don't know what the original frame's stick is made of but it's certainly not a great piece of wood.

At this point I need to trim the brass tube, and I want to sand the handle some more. But it was late, I was hot and hungry, and decided to call it an evening.
Posted by Claudine de Montigny at 9:15 PM No comments:

I finished the powder blue cotton parasol that I was embroidering in this earlier post. This parasol was the finished sample for my class last week, though it wasn't really done until I picked up the tassel from Lynn McMasters at the class. Here's the full photo spread I took after the class.

For your amusement, here's the reverse sequence of how this parasol came from a modern umbrella. 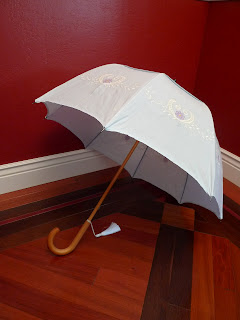 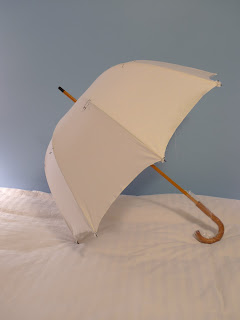 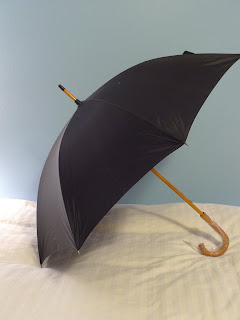 Posted by Claudine de Montigny at 11:20 PM No comments: